In order to create a story you must register on the platform first. You will see that on the top right you can start the registration process.

If you click on New Story, you will start to create a story. You must write a title, a summary of the book, select the language, the category of the book, and the image of the cover. These parameters can be modified in the future, so do not worry too much about it.

The story you are about to write should be divided into chapters. In each chapter there are several pages. There are also the links that link the different pages together. Each of the links is one of the decision options that the reader takes. Each chapter has a Start page (or entry) and other Final (or exit) pages. In addition, you can have pages of Death, which is when the reader has chosen the wrong path that ends in disaster. 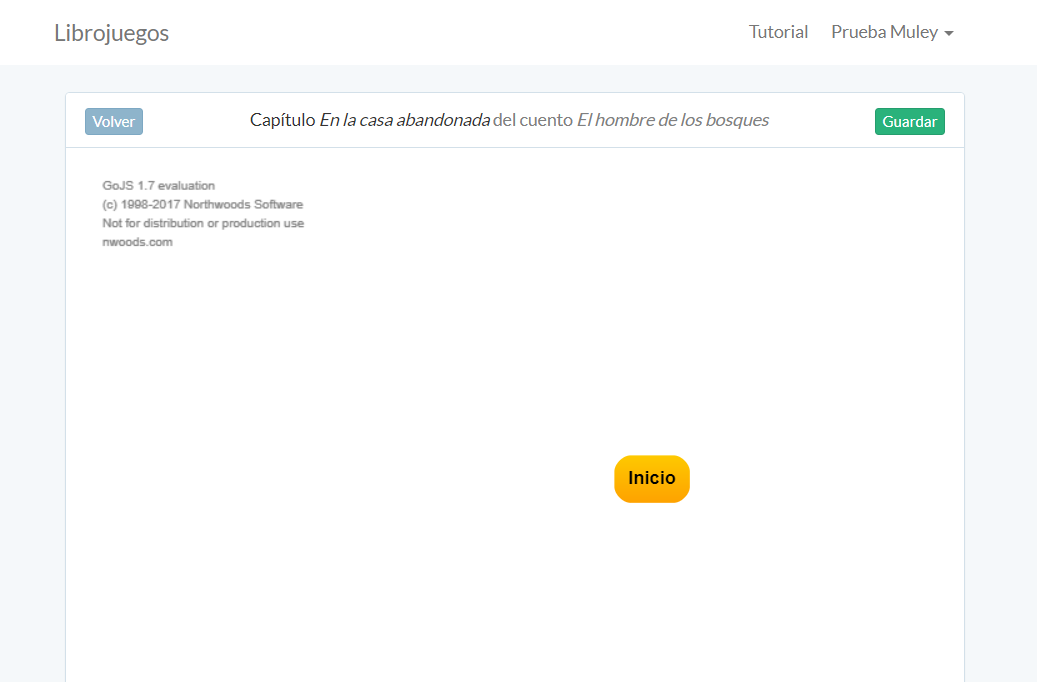 You have the Story editing screen in front of you. You see that you have a node in front of you. The nodes are pages. If you click on the text once, you will see that you can edit the title of the page. This title will show you which part of the story you are in. If you double click on the node you will see that a modal window shows up where you can edit this page of the story. You can edit texts with different fonts, colors, or upload images. In addition, below you have a selectable that allows you to indicate if this page is a page of Death, if from them you can go to other Chapters, or if it is the happy ending of the book.

In addition to the nodes you also have the links. If you click on a node you will see that a + sign appears at the top right of the node. This allows you to create a link from this node to a new node. You can modify the link text by clicking on it. This will allow you to change the text of the link that redirects the users to another page of the story. 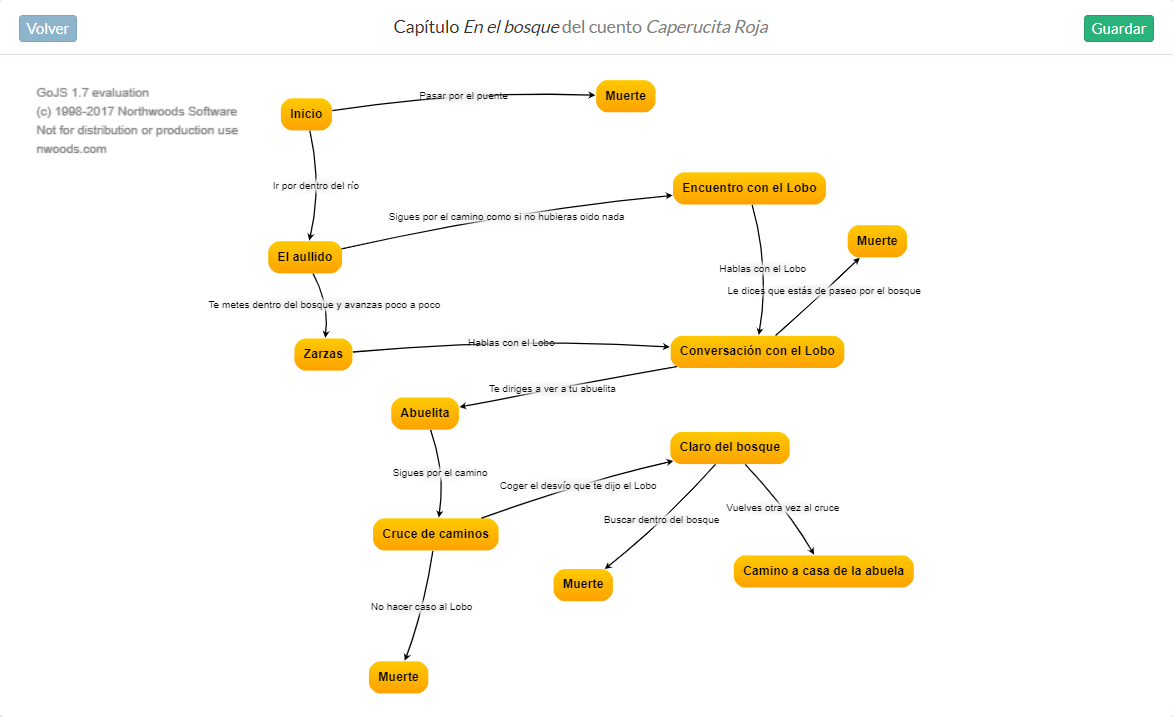 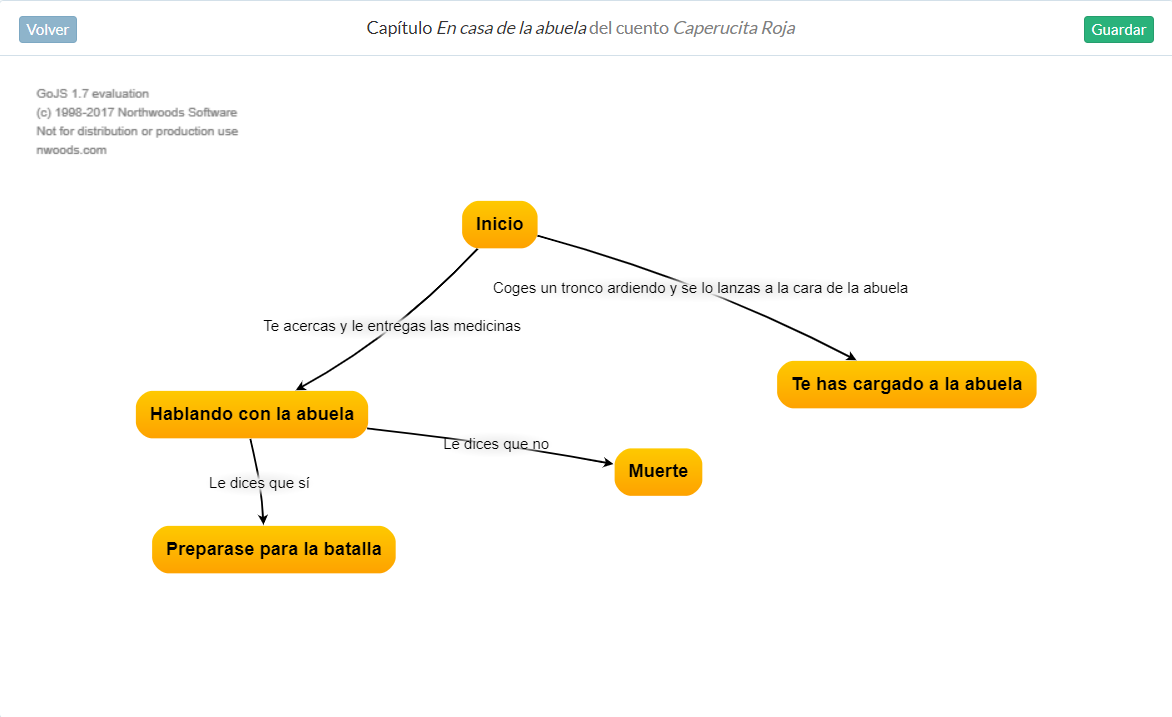 The adventures are basically the same as the Stories but with additional options to make the book a role play book.

When the reader starts reading your book, you will have the option to create a new character. The character has the following characteristics:

Other parameters of the character

There are other parameters that define the character. They are the objects and events.
The objects are all weapons, potions, armors, etc. that the character has, and that make him more powerful.
When you read a book, by clicking the inventory button you can see the objects you have. You are allowed to select some of the objects such as weapons, armours and shields. When selected, the bonuses that those objects have will be transferred to your character. You cannot select more than one object from a specific category at a time. For example, you can not wear two armours, or two shields.Once you make a selection the object will have a blue shield which will allow you to easily see the objects that you have already selected.
There are other objects with bonuses that are selected immediately. They are not classified as one-handed weapons, two-handed weapons, defensive objects, bows, ... but simply as objects. They can be amulets, rings, pendants. Some of them have magical properties that increase your defense or attack. You can carry as many as you want at the same time.
The events are all those events that occur during the story and that can open (or close) access to pages of the story. For example, if X meets Y for the first time, on a subsequent page, a new plot could be opened.

Throughout the story, the character kills enemies, deciphers puzzles, etc. That makes them gain experience. By gaining experience, the character will improve their attack and defence capabilities, or their perception, intelligence and charisma. The reader decides how he wants his character to evolve and what kind of things he wants the character to do.

The character has money to buy other objects, etc. You can earn money by beating enemies, founding treasures, etc.

If you want your story to be an adventure you must select the “ Adventure - Role Playing Game Book” option right when you start writing your story. This will enable new features. On the “Edit” page, you will see three buttons: Events, Monsters, and Objects.

The events have titles, and descriptions. 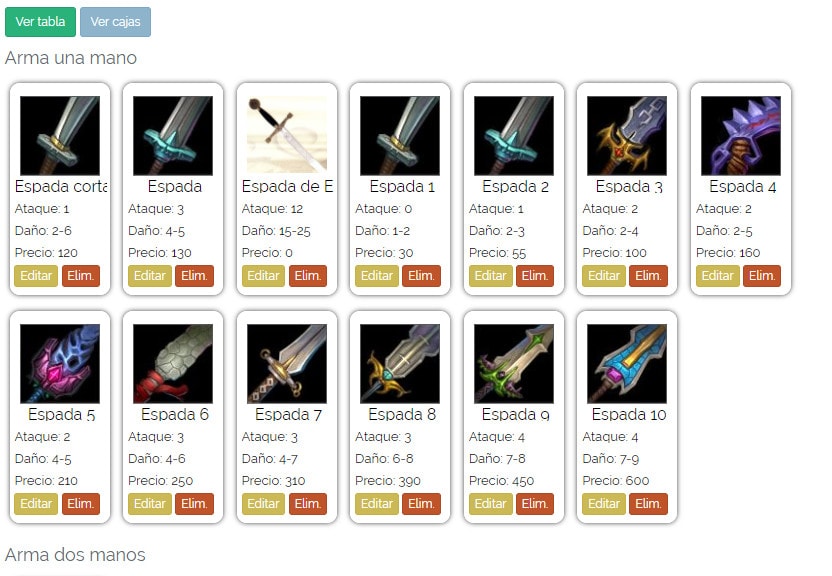 Objects have many parameters to configure:

Monsters are the enemies that you will have to kill.

During the reading, the character may encounter enemies to eliminate. Then a fight begins. The character can face a single enemy or several at the same time. In general, the first one to attack is usually the character. But it can happen (the writer of the adventure has the option to change it) that the monsters have the initiative, and are therefore the first to attack. This will happen when the character is ambushed, falls into a trap, etc.
The character and the monsters have their properties of attack, defense, absorption, and points of life.
In each attack turn, the attacker and the defender will roll a die. The value showed will be added to the value of attack and defence . In case the attack value exceeds the defence value, the attacker will damage the opponent’s life points , and the damage will be equal to a random number between the minimum and maximum possible value that he can perform. The value resulted will be subtracted from the absorption value of the defender.
There are some modifiers that can be applied to both the character and the monsters. These modifiers can be decided by the writer of the adventure, or they can be the result of spells performed by the character or the monster.
They are the following: 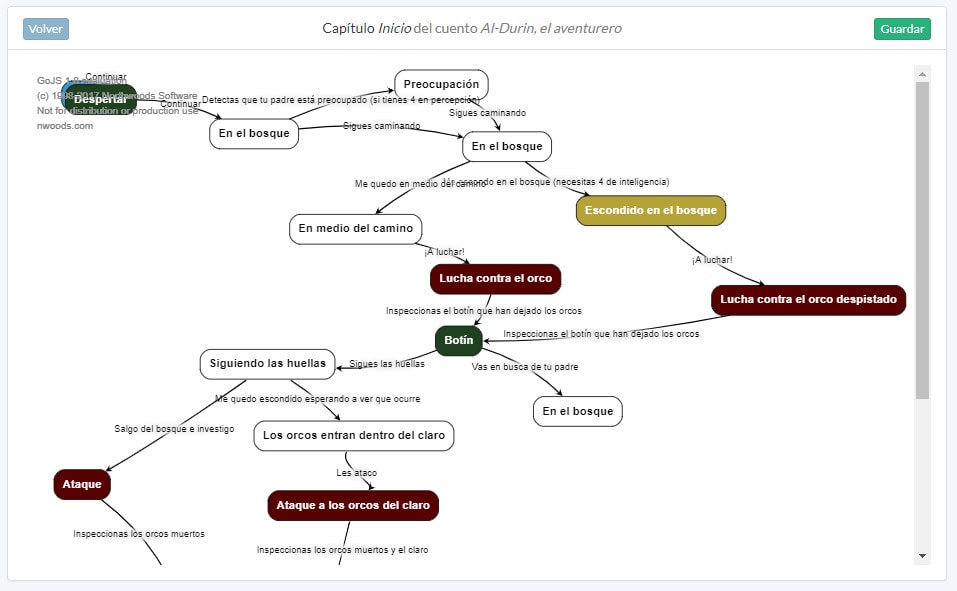 Once you know that you can create monsters, events, spells, and objects, you can start editing the adventure.
You will see that by double clicking on the nodes or links you will see new options.

Edition of the nodes (pages) 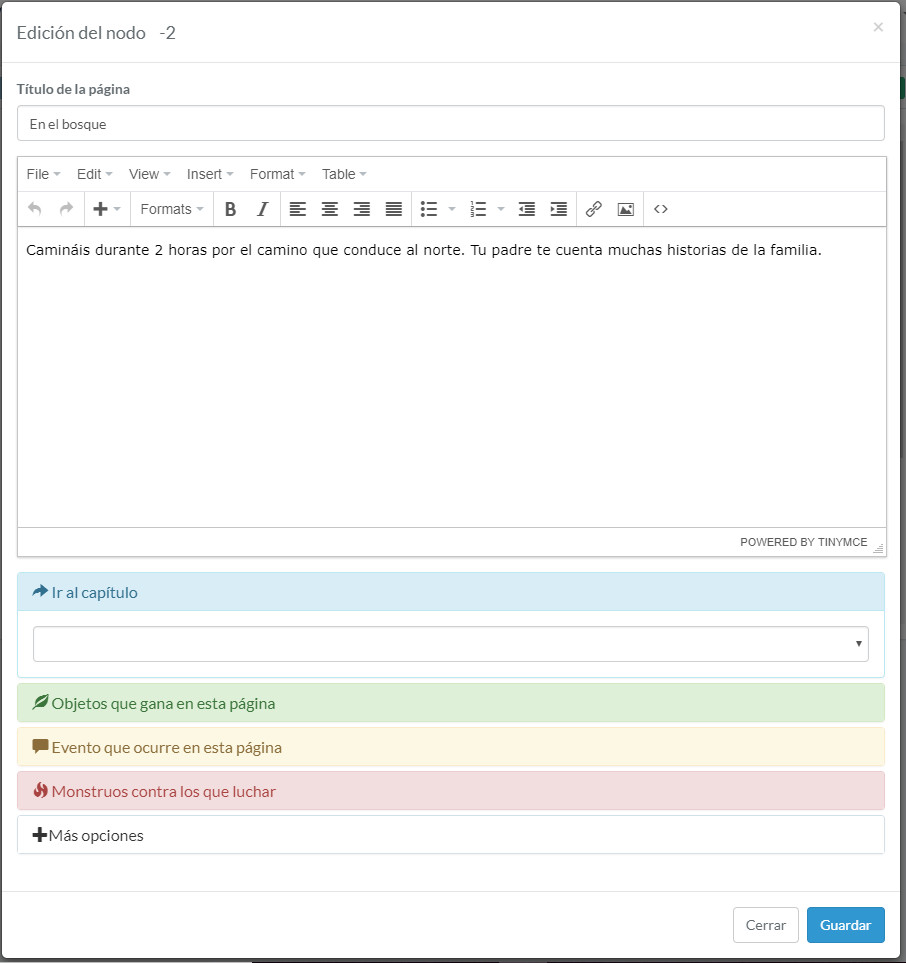 If you click on the link, you will see that you have several additional options:
Required object: you can not access the next page unless you have a specific object.
Required events: you cannot access the next page unless you have a specific event
Required money: maybe the character has to pay someone to get into a place. It should have a certain number of coins.
Other options that you can see:
Click here if you want the reader to be able to see this option although he shouldn’t (instead of a link, it will be a non-clickable text): If you want your reader to know that he / she was NOT able to go to a certain page ( due to, for example, a lack of money, or the lack of a specific level of perception, etc.), you can click this option. This way the reader will be aware of the fact that there was a reason why he was unable to access that option.
Minimum required intelligence: the character needs this level of intelligence to access the next page
Minimum perception required: the same as in Intelligence
Minimum necessary charisma: the same as in Intelligence

Tutorials on how to create bookgames

Registration and creation of a new story

How to add objects and monsters

Creation of events. New links depending on whether or not you have an event.

Do you want to learn how to write your game book?
Saturday, April 11, at 5:00 p.m. (Spanish time), I will teach a free live webinar about how to write an RPG using the bookgame.me tool. It will be broadcast live through Zoom.
Sign Up More information